Portal to the past 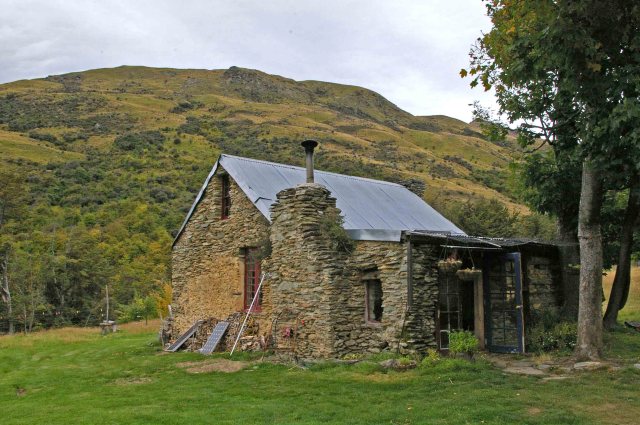 Tucked in a remote valley accessed only by sheep track, the hand-built stone cottage looks like a portal to the past – to a time when miners crowded the Moke Valley behind Queenstown in search of gold.

Mountains rise steeply around it – beautiful, bleak, and unforgiving. Old wagons lie tilted on the grass; there’s no power lines, no car. Only a couple of solar panels propped against the side of the house hint at the 21st century.

It could be a film set. In fact, it was.

Back in the 1980s when New Zealand’s feature film industry was just finding its feet and some illustrious careers were in their infancy, McConnocchie Retreat featured in A Woman of Good Character. Directed by David Blyth, starring Bruno Lawrence and Sarah Peirse, the film was designed and produced by Grahame McLean – the man who bought, restored and now lives in the cottage fulltime. 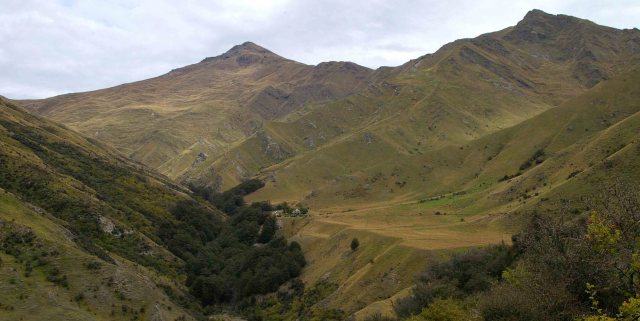 “At the time I had a lot of horses because I’d bought 28 when working as property master for Hunters Gold. Afterwards I kept them and regularly rode up in the mountains with a friend, exploring areas where miners had lived.”

He has photos of what it looked like back then – little more than a chimney and some remnants of stone walls. What was interesting about it, says Grahame, is that the original owner hadn’t just leased a plot as most miners did, he’d freeholded 54 acres.

“It’s likely the area was cropped – providing produce to what used to be Moke township. At one time there were up to 3000 people living there, just over the hill, mostly under canvas. There was also a schoolhouse that had a roll of 28.”

The remains of that school can still be seen along with a couple of restored wooden buildings that author Barry Crump lived in for a while. But the ruins are now known as Seefertown after the Seefer family who lived in the area until the 1950s, Grahame explains.

Four years after finding the land, he bought it – and when a location for filming was needed, he set about restoring the cottage. Based on existing foundations, modelled on dwellings of the time and constructed with mortar made from local clay, the re-build was as authentic as possible. Even the beams were hand-adzed from a couple of nearby pine trees. 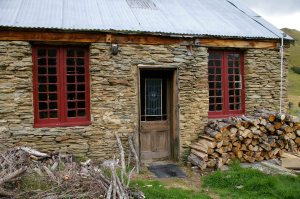 What’s amazing is that it was all done – including an access track – in just three weeks. “We had 16 of us here with two shifts of eight working 12 hours each, seven days a week, because it had to be ready for filming.”

It probably helped that Grahame’s various careers included building. “You couldn’t generate enough income from film back then, so between film projects, I restored old buildings – including a lot in downtown Queenstown.”

Before coming to Queenstown from Wellington in the late 1960s, Grahame worked in publishing and was one of the original founders of National Business Review. His first foray into film came after he’d successfully put on a James K Baxter play festival in the early ‘70s and was asked if he wanted to produce a New Zealand TV series based around the 1973 Commonwealth Games.

The Games Affair proved a success and subsequent titles he’s worked on read like a rollcall of Kiwi Classics: Hunters Gold, Sleeping Dogs, Beyond Reasonable Doubt, Worzel Gummidge Down Under, the Ray Bradbury Theatre, Sons for the Return Home, Flying Fox in a Freedom Tree…..

His roles ranged from props master to director and producer and while generally short on finance his projects were long on No8 wire mentality. “Back then we could make a feature film for under a million dollars with a crew of 14. These days crew lists run to more than a 100…”

Along the way, he helped kickstart a few careers. Fran Walsh’s first scriptwriting job was adapting A Woman of Good Character to a tele-length feature, Peter Jackson worked on Worzel Gummidge. Meanwhile, Grahame’s own fortunes took a dive in the late 1980s crash when DFC went belly up.

“They’d had this idea someone should build a film studio in Wellington so loaned me a million dollars to do it but in the process took a hook over everything I owned. Then they folded and took me down with them. “I had a net asset value of around $3.5 million in the morning and at the end of the day walked away with $6800. That was 35 years of work down the dunny.”

Now 72, he no longer has any hands-on involvement with the world of film – reckons he’s “past use-by date” for that kind of full-on work.  Eight years ago he chose to shift to the cottage permanently. Despite a heart condition and accidents that left him with a head injury and damaged shoulder, he enjoys the isolation.

Visiting WOOFers (Workers on Organic Farms), who come from all around the globe, help out with property maintenance and often bring supplies in. Tourists sometimes arrive by helicopter. But Grahame enjoys his own company – staying in touch with the world via internet.

Solar power to drive his computer is about the only concession to modern living. In many ways, he lives as simply as did the early gold miners. Cooking is done by gas burner, on the fire or in the clay oven he’s built in the frontyard; food is kept in a safe.

The place keeps him busy, says Grahame. “If I lived in town, I’d probably end up propping up a bar. Here I’m never bored.”

He doesn’t think he’ll ever leave. “I’d prefer to die up here. I certainly don’t want to be in some granny flat somewhere. I have no desire to be anywhere else. My nearest neighbour is a hundred thousand acres away and that’s the way I like it.”

I'm a writer / photographer usually based on Waiheke Island in New Zealand but currently traveling the country in "snail" - my mobile home and office. Along the way, I'm telling stories about the places I see or people I meet and building up a beautiful library of photos - of New Zealand's coastline and mountains, its walking tracks and wildlife. I'm happy to supply illustrated stories to New Zealand and offshore publications. My work background includes editing business and lifestyle magazines, crafting features on topics ranging from management and marketing to frogs and fashion, creating organisational narratives and promotional literature. Please visit my website for more information. www.writeawaycommunications.co.nz
View all posts by vjayne →
This entry was posted in Uncategorized and tagged filmset, goldmining history, Grahame McLean, New Zealand, New Zealand film, stone cottage, travel. Bookmark the permalink.

5 Responses to Portal to the past