Joni Mitchell said it years ago. The Woodstock song. But I hadn’t really equated it with the self-contained recycling scheme that is our planet until a recent conversation with NZ sculptor Johnny Turner. 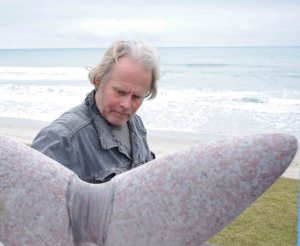 He works with rocks that are 600 million years old. I guess that can give you a different perspective on life, death and regeneration. When he cuts into a chunk of Russian red granite, there is a sense of awe in being the first to see what that ancient timeline has wrought.

It’s a brutal process – sculptor vs rock. A contest with many rounds.

Rock, he says, is the most obdurate material you can work with. Sculpting traditions talk of ‘killing’ the stone before it is subjected to the metamorphosis of mind and tool – reshaped, rebirthed, polished lovingly into its new possibility.

He goes to bed dreaming those possibilities, wakes up wanting to bring them into being. Pieces of marble, basalt, granite lie waiting in various stages of composition –all just a stone’s throw (so to speak) from the eternal pounding sea.

Working at his Wainui beachside home, Johnny likes  to see himself as a participant in the grand recycling scheme. From the balcony where he chips and grinds, dust blows into the sea, sinks to the bottom, finds its own faultline in the earth’s crust, drops back into the melting pot of the earth’s core to re-emerge erupted from a volcano….which is how basalt arrives.

There’s a kind of irony in it. A point of tenuous balance.

Working on rock allows thought to drift outside the normal timespan of daily life.

It’s what helped him to survive after family tragedy left its “hoofmarks” pitted deeply in his sense of being. Discovering sculpture in his mid-40s became his own rebirth. It probably prevented him from being just another sad drunk, he reckons. Instead he works out the hoofmarks in his daily contests with the obdurate rock – they give his life a purpose.

As he says, it is all about life, death, regeneration. That’s the attraction of stone for him. Ashes to ashes, dust to dust. Just like humans. “We are stardust…” he sings atonally with a bit of a grin.

“She’s talking about the deal we do with life – we have this short fleeting moment and it ends. The deal is, it ends. The fact that this material is stardust is what attracts me to working in it ..”

It’s all here, the matter of our tiny world, nothing is added, bar the odd meteorite, nothing is lost bar what NASA and Co dispatch into the near or distant reaches of space. This is what we are and all we have.

Thinking of timespans beyond our own is something most of us aren’t too good at.

It’s perhaps why we lack the humility to respect and mind our precious place in the continuing pattern of life, death, regeneration. It’s the anxiety that sits at the back of my own mind constantly – it is, I believe, an anxiety that hovers in the collective consciousness.

Like the elephant in the room that noone wants to acknowledge because then they will need to address it, the knowledge that we’re too many and we consume too much. And we can’t go on in the way that we’ve become habituated to.

So we scrub between the elephant’s toes, measure the area of its skin, figure out ways to sell or rent the growing space it needs to occupy…Avoid looking it in the eye.

Because the elephant is all of us. We need to change – but really we don’t know how. Tootling around with my world contained in a small box on wheels might give me the illusion of living a simpler life – but I couldn’t do this without diesel, without roading infrastructure, without shops that sell me the produce I’m not growing or the batteries to power my camera.

What is the best path to collective change? What has to be sacrificed to get there?

I don’t have the answers. But it’s part of the battle of resistance and change that informs Johnny Turner’s sculptures. It requires humility, patience, acceptance of our tiny precarious place in a world that will carry on the regenerative cycle with or without us.

What marks will we have left in the compressed timelines of ancient marble? Or the densely compressed reality of basalt born from the earth’s molten core?

Pushed down, pushed out.

And to dust we return.